Skip to content
Mary and I drove to the farm on 12/26/2011 to continue cleanups and improvements and enjoy the country life.We were greeted by Peggy’s rooster known as Buffy–as he is a Buffington breed. He came to visit every day and hung around often hopping along in the oak tree. Something else for the dogs to bark at–as if they needed something else.

We accomplished a lot other than relaxing-country life is not always relaxing. As Dad would say: the more you work the more there is to do. One of the highlights of the trip was buying a new bed. That made a lot of difference in how well we lasted as the third and fourth day came along.

This was a special time as our first full day would have been Momma’s (Dorothy) 91st birthday. It was very rewarding to recreate flower beds on the front and west side of the house and plant red roses and gardenias.  She would have been very pleased. 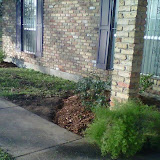 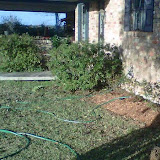 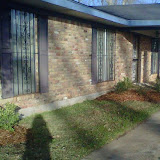 You cannot see the improvement in the front door in the above photos but Mary scraped and sanded it so the new paint would adhere. It is pretty far gone as far as looks are concern when up close. But, it is secure and looks good from a distance. I also installed a new door bell button.

We enjoyed seeing the farm at this time of year as we always came for Thanksgiving and spent Christmas in Houston. But, this year we needed to finish preparing the pump for winter. Mary also painted the pump house and I finished the styrofoam insulation. Just in time as it is to be in the 20’s three nights next week.

The weather was fantastic as it was in the high 60’s to low 70’s and clear blue sky every day. We did have a good frost one morning. 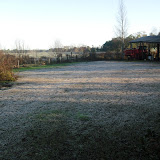 The only part about the weather that was disappointing was that it was not cold enough at night to have a fire in the fire place. Mary was ready with her eggnog and rum and thick robe to curl up in the chair and stare into the fire…but that will be another day. 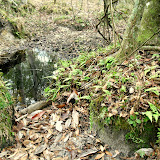 I began the war on the small stand of Kudzu that has begun to take over a portion of the stream area. This first action was to cut off the main vines just above the ground level. The plan is that when they sprout next spring the cows will eat the leaves and help stunt further growth. In addition, I plan to cut the “stumps” off again and treat them heavily with Roundup. From what I have read if the war is waged faithfully for 10+ years it may be eradicated.

I also cut a lot of large grape vine stalks in the trees along the creek next to the little field.

I found the original sheet metal cap to the chimney and when we were preparing to leave I climbed up on the roof and installed it. Of course all boys like to be on the roof and see what can be seen. So, I took photos and they are below as two of the panoramic composites.

Below are thumbnail’s that link to large panoramic views of the north field and the stream area. There are also images from the roof of the house looking north toward the row crop field and one looking south showing the view from the front door–if you are on the roof.

Welcome. This is a personal website serving as our journal for the farm and digital library. There is no effort or intent to offer advice, recommendations, or information related to any products cited or techniques described.  Any extracts from the manufacturer’s labels or instructions at this site are only for our use. Always refer to and follow the complete manufacturer’s label, directions, and/or instructions. Given that understanding, you are welcome to look around. If we can help you then email us at tom[at]davis360.com.